I was 25 years old and in London for the first time. I was there trying to get Alice Cooper well known. I went to the record company and was taken into Derek Taylor’s oval sunken large office. As I looked around the room there was George Harrison in long white flowing linens fresh back from India, George Melly (an English alcoholic jazz artist who, it was obvious, was idolized by all in the room), and Harry Nilsson in the middle of it all pouring drinks for everyone. Lots of laughs, lots of drinking. The party went on for DAYS. For many years after i was lucky enough to stay friendly with Harry. The common element of all our meetings was having a meal and drink or two. Drunken lunches at ST JAMES club on sunset were the norm … always a lively conversation. I always left Harry thinking how lucky I was to spend time with him. A truly great American artist. 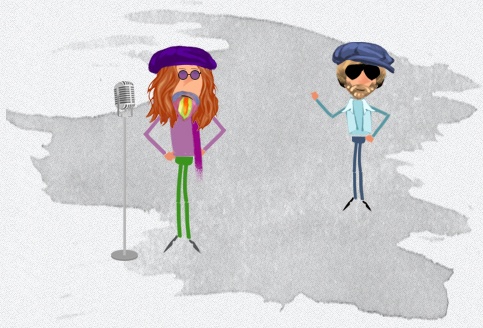 Mark Hudson, long time pal and collaborator of Harry Nilsson, has accomplished what many thought might never happen. He’s managed to deliver unto us the first album of new Nilsson material in nearly 40 years. In celebration of Harry and of the upcoming release of “Losst And Founnd”, Mark shared just one of his many memories of Harry with us. Thank you for the story Mark and for bringing us more Harry.

So we were in my studio and we were writing songs. Harry said he needed a break to have a smoke which I told him not to but he wouldn’t listen. So he’s sitting there with my brother Brett and I figured since I had time I would put on a record I was working on and sing a vocal. So I get the track up, put on headphones and start singing. Harry was talking and smoking away I could hear him talking and laughing through my headphones which meant it was going on tape. I stopped the machine, turned and said to Harry …” Jesus Harry, cant you see that I’m singing the lead vocal?” He took a big drag from his cigarette, looked at me and said … ” consider it background vocals” That was soooo Nilsson. Funny though… I kept it and when you hear the song ”Give it Back” on my solo album you hear Harry talking through the entire song and I credited him as background vocals. 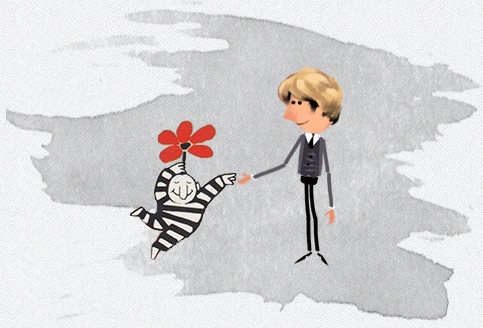 Skidoo, the infamous psychedelic Otto Preminger film starring a veritable who’s who of some of Hollywood’s biggest stars also featured a young Harry Nilsson, and playing Fred the professor was Harry’s co-star, Austin Pendleton. Here, Austin shares his memories of Harry with us …

I wasn’t in scenes with Harry in Skidoo, but he was a beacon of light on the set of that movie, and then in Miami when we were at the premiere. We had long talks — he told me about his life, and connecting with his biological father again. I remember how moved and excited he was by that, down there in Florida.

I don’t think I ever saw him again after the Skidoo set and its premiere. And I always looked forward, after that, to seeing him again.

A composer, musician, producer and artist, Jimmi Accardi has written and played with some of the best. Here he shares a few fond memories of his time with Harry … towards the end.

I first met Harry in 1977 when I was the guitarist for Micky Dolenz & Davy Jones during their Monkees reunion tour in 1977. I didn’t see him again until 1993 close to Christmas time. It was more of a social/friendly visit but quickly turned into a two day recording session.

It was in northern California (Grass Valley) at our mutual friend, E.J. Gold’s, home studio. Harry knew E.J. from the 60s at RCA. We had Bob Bachtold join us on drums and Oz Fritz (engineer for so many great artists including Tom Waits). We hung out and jammed and Harry told us what was going on with him and trying to get a new album out. One of the sad things he said was that he left a demo of his new songs at RCA and they never got back to him so he had to call them. That’s when he found out that they never even gave the tapes a listen! He played us some ideas he had on cassette tapes of the things he wanted on his new album. One was a Jimmy Webb tune called “What Does a Woman See in a Man”. Also – “Try, Try, Try”, and a song that Yoko Ono had written lyrics for called “SNOW”. Harry gave me a cassette with just his voice and a single instrument on it. He asked if I would overdub some vocals, guitar, and drums so we did. We also did a duet of a mashup of “Yesterday” and “Georgia” which Harry was convinced was practically the same song except for the lyrics and a single chord. He asked me to sing the “Yesterday” part while he sung “Georgia”.

He’d recently been in the hospital due to complications with his health (I think due to years of abusing his body with drugs and alcohol), and his voice was shot – very hoarse and almost completely gone. But he was having a blast and it was great to have the honor of helping him out. During his stay, we talked and it came up that we were both born in the exact same section of Brooklyn (called Bushwick). He also shared a few stories about the time he spent with The Beatles and especially John. When he was getting ready to go home (he had his kids and his wife Una with him), he was excited and we had plans for him to come back to finish making the demos that would knock RCA out of their socks! I was actually working on one of the demo tapes he left when we got the call that he’d died in his sleep. What a sad feeling that was!!! I remember we had kind of our own vigil for him and recorded a whole album’s worth of Harry-inspired stuff including “Spaceman”, “Jump Into the Fire”, and many more. I still have the recordings.

One more thing. Harry was lazy and had to take a pee during one of the recording sessions and didn’t want to walk all the way from the studio to the house to use the bathroom. He asked “Would anyone mind if I peed on the big tree outside the studio?”. So he did and after he passed away – we named that tree “Harry”!