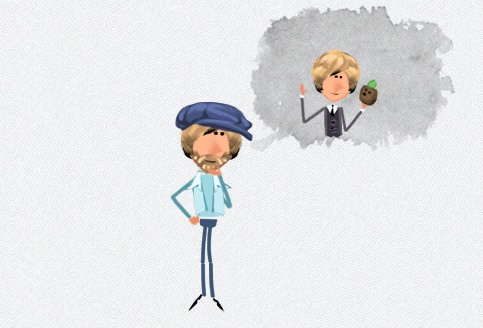 I recently reached out to Eric Idle to ask if he might be willing to share some memories of Harry. To my great surprise and delight, he was. Eric kindly sent me the piece below and has allowed us to republish here. Thanks Eric!

Harry and Ed Begley came to the show and I went out for a drink with them to a bar on Sixth Avenue round from the Hotel Navarro where we were staying on Central Park South. I liked a drink in those days but Harry was a professional. There was a lot of merriment but Harry could always say something sharp and I remember feeling hurt that night that he called me the Paul McCartney of Python. Why I should have taken it as an insult I have no idea. Perhaps because I loved George and was very close to him at the time and the current take on Paul at that time was not exactly flattering. But I remember being offended. Silly sod.

Harry was first a friend of Graham Chapman. Graham died over a million dollars in debt, his partner recently revealed. I suggested at the time that he died beyond his means as he had lived beyond them. Some people apart from Python must have paid for this profligacy, and I suspect that Harry was one of his benefactors. They shared a common alcoholism. Harry was also a good friend of Derek Taylor who had produced that killer album of oldies.

One night during the run of Monty Python Live at City Center, George Harrison came on stage for the Lumberjack song as a Mounty. He stayed in the chorus, behaved absolutely perfectly and no one would have known it was him. Harry heard about this and there was nothing for it but that the next night he was going to come on and be a Mountie too. So we dressed him up and he entered with the Chorus of Mounties on cue. But Harry’s performance was a little different from George’s. For a start he was drunk. For a second he had no intention of remaining anonymously in any chorus line. He was a big star and he wanted the audience to know that it was him on stage. So he wore dark glasses and waved his arms around and leaving the chorus line he moved about on stage gesticulating, swaying dangerously, lurching around and generally attracting attention to himself from the focus of the song which was er, well, me. The Lumberjack anyway. This caused a certain amount of frosty disapproval from the Mounties Chorus members like John Cleese who were less than fond of Graham’s alcoholic rock and roll friends anyway, but who had been delightfully enchanted by George and his sweet professionalism. So when the song ended there was a feeling of “thank God that’s over” as we all stepped back after the applause to let the curtain drop. All that is, except for Harry. There was a huge wave of applause and cheers triggered by the end of the Lumberjack song, which was in any case the encore and finale of the entire show and Harry wasn’t going to miss a minute of any of this. So as we stepped back he stepped forward. The curtain fell. “Where’s Harry?” we went. And then laughed as the curtain went back up and he was nowhere to be seen. He had stepped forward into the dark to acknowledge the cheers and fallen head first into the orchestra pit. This gave us quite a big laugh onstage, and a feeling that it certainly served him right. (He had been asked and warned to hold hands and step back with us.) So we all had a good laugh at his expense and even when it was revealed that he had broken his wrist in the fall some unkind chaps, the more cynical members of the comedy fraternity, expressed less than half-hearted murmurs of sympathy and considered comedy karma had triumphed.

I spent quite a lot of bar time with Harry around the dates of our performances at The Hollywood Bowl (1980). He would hold court at his regular seat in the Bar of the Bel Air Hotel which was usually followed by food and refreshments up at his strangely modern house in Bel Air. The long suffering Una seemed to have dispensed with most wifely constraints, for Harry had a very long leash. I guess he was probably uncontrollable. The intake of brandy and tobacco and cocaine that had killed his voice would eventually kill him.

Rather flatteringly he was recording my song Always Look On The Bright Side of Life and it seemed to involve interminable sessions with legendary rock and roll figures and a chorus of celebrity friends on at least two occasions. I think Harry just liked the whole studio thing, because I remember being outraged at the profligacy of the entire enterprise. You must remember we parsimonious British boys never had a penny more to spend on anything than utterly necessary and watching the way Californians would let hours of studio time roll by was unnerving. Anyway it unnerved me and somewhere around then I was playing a lot with Ricky Fataar (Stig) and Charlie Dore and I had this catchy little tune that I wrote called “Harry” and as soon as I got back home to London I went into the studio with John Du Prez at Redwood in Neal’s Yard and we popped it down in a day. It came out very well and of course the little sting in the tale, the little zinger from me, the nudge nudge line is at the end “at least it didn’t take us very long Harry…”

By this time Harry was on Malta with Robert Altman making Popeye. Robert had decided that it would be a good idea that all the musicians came on location too, which had occasioned the wildest parties and greatest binges and most drug imports in Maltese history. There were legendary tales of excess mostly centered around our Harry. Derek Taylor took my little recorded song gift to Harry on location, and it worked like a charm; he was bowled over, nobody had ever given him a gift of a song, certainly not about him. Got you I thought. But he got me back. On the next and sadly the final Harry Nilsson album which he put out in the UK that fall, he put my track as the opening number on the record, so I actually open a Harry Nilsson record!

A little sidebar. When I had finished the recording I took the record to meet Derek Taylor at Ron Cass’ house in London. At the time he was married to Joan Collins. Well she was there and very friendly as she always is, and they wanted me to put the new record on, so they played it and on came Harry. Well they liked it, but then a little girl appeared from upstairs. Joan’s daughter. She had heard the track (it must have played through the house) and she loved it and wanted to hear it again. So they played it for her another couple of times. Joan said she had never behaved like that before, so I was flattered and happy and we left. A little while later the little girl was involved in a terrible accident and was in a coma for weeks. I was told that the first sign of response they had from her was when they played Harry to her and she responded. I was always really moved and proud and happy about that.

Other people’s memories of Harry are a little more unkind. One lady remembers Harry offering her cocaine when she was pregnant and another of him being so drunk at a party he knocked his kid into a pool. Oops.

That was the thing about Harry, like a lot of alcoholics he could be great fun and then a great pain in the ass. I remember once late in the evening at Tramp’s in London I was standing on a small round table with Harry, George, and Ringo, all of us out of our minds, next to a table full of Italian waiters trying to out sing them in Volare. It was uproarious and then it was over and time to leave. But Ringo wouldn’t. He must have one more bottle of brandy. Things got a little tense as it became clear he wouldn’t leave. That’s the trouble with alcohol. Ringo got serious and cleaned up, Graham got serious and cleaned up but Harry never did. Which is why he passed away in 1994 around the time of the earthquake instead of being here now to enjoy his kids and his grandkids and writing and playing us the lovely melodies that he did so well. So sad.

Remember is still one of the best songs ever written. And there are one or two of Harry’s which are in the Cole Porter class, something that the wise and witty Derek Taylor thoroughly recognized.

His songs seem to get better with age, and I find myself playing him very often and missing the uproarious evenings and laughter filled arguments.

He was indeed a pretty nifty guy.

Previous: "Harry Nilsson by David Edward Byrd"
Next: "Light Up With Schmilsson"